Visual studio Introducing .NET 5 and .NET Core is the Future of .NET

In this artical we are going to introducing .NET 5 Features and release date.The microsoft announcing that the next release after .NET Core 3.0 will be .NET 5. This will be the next big release in the .NET family.The microsoft says that 'There will be just one .NET going forward,and we will be able to use it to target Windows,macOS,iOS, Linux,Android,watchOS,WebAssembly  and  tvOS and more.
The microsoft will introduce new .NET APIs, runtime capabilities and language features as part of .NET 5.

.NET Core 3.0 closes much of the remaining capability gap with .NET Framework 4.8, enabling Windows Forms, WPF and Entity Framework 6.The microsoft intend to release .NET 5 in November 2020, and  also available first preview in the first half of 2020 and this is supported with future updates to Visual Studio 2019,Visual Studio for Mac and Visual Studio Code.

NET 5 is the next step forward with .NET Core. The project aims to improve .NET in a few  key as given below:

.NET Core will continue to exist:

Here’s what will be new: 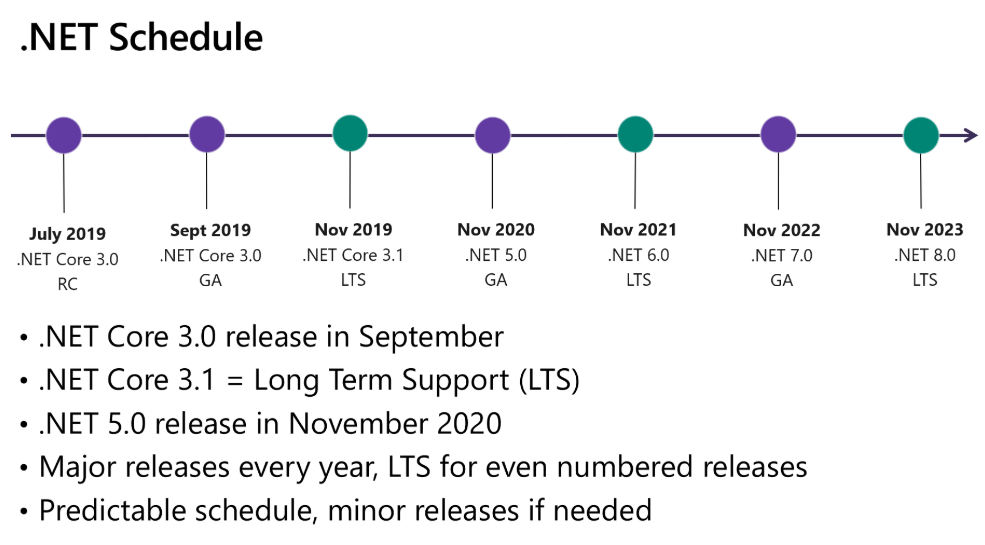 CoreCLR (.NET Core runtime) and Mono (cross-platform) are both .NET runtimes with their own capabilities, but they are also quite similar, mostly due to the underlying .NET Framework. With .NET 5, you will be able to pick the runtime experience that you want.
Most .NET 5 workloads will be using the JIT (Just in Time)-based CoreCLR runtime. iOS and Blazor, on the other hand, would require AOT (Ahead of Time) native compilation. AOT solutions are split up in two different solutions:
⦁ Solutions requiring 100% AOT compilation
⦁ Solutions comprising of mostly AOT compiled code, but a JIT compiler is available for code which is not AOT-friendly
Announcing .NET Core 3.0 Preview 5

⦁ JSON serializer introducing and an update to the wirter

Conclusion
In the overall a really exciting time for .NET .NET Core 3.0 is a really amazing release by microsoft, and .NET 5.0 will be equally, if not more, amazing! If you’re interested in a roadmap to .NET, it’s hard to say the specific features of each version, but here’s a schedule roadmap Microsoft has released publicly that maps our .NET release times all the way to .NET 8.0!

What is a Flowchart, Flowchart Symbols with Example

What is Telnet and How to Used It

How to Convert Source Code to Machine Language Code

An error occurred while processing your request.Request ID: 80001562-0000-db00-b63f-84710c7967bb Development Mode Swapping to Development environment will display more detailed information about the error that occurred.

How to Install Zoom Application For Client Meetings in Windows

What Is a Protocol?